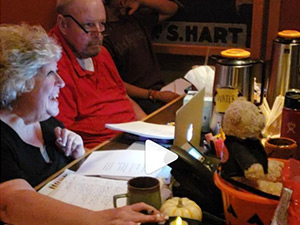 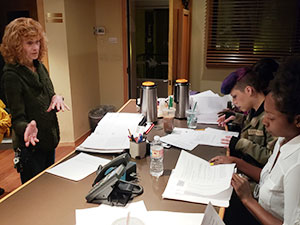 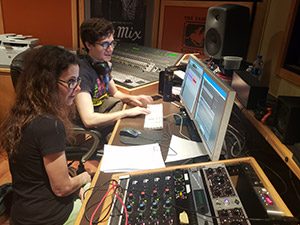 Alyson Steel directs a class in Accents for Actors 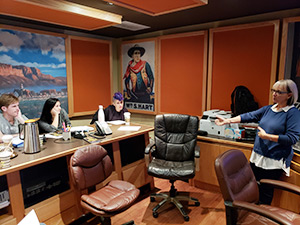 Laurel van der Linde – has a career that encompasses everything from the sound booth to the sound stage, from ballet to Broadway. Having sat on all sides of the production table as a casting director, voiceover agent, producer and director, she understands the requirements of each production discipline as well as the needs of the individual actor. She has produced and directed audiobooks for such publishing houses as Hachette, Brilliance, BBC AS and Full Cast Audio. Laurel is also a writer with a five books to her credit published by MacMillan, Lerner and Simon and Schuster along with a host of magazine articles.

Joyce Castellanos – worked for over 25 years as an audio director/producer at NBC, Disney Channel, Warner Bros. and The WB Television Network. She was a talent agent for two years and has coached voiceover for more than 17 years in the areas of promo, trailers, commercials and narration. Her broad experience keeps her on the cutting edge of the industry.

Alyson Steel – is a graduate of the “Famed” High School of Performing Arts in NYC. Alyson received her BA from Queens College. After achieving an MFA in Dramaturgy from SUNY Stony Brook, she moved to LA and began an impressive and extensive VO career. Alyson has been heard on both regional and national campaigns for TV and radio including Guitar Enter, Pajamagram and the voice of Norm Restaurants. She has also done promos for E, Hallmark Channel, Fox and ABC. In addition, she has also narrated for such shows as Style Network, The Food Network and Home Made Simple.

Myron Chandler – is fluent in all technical aspects of audio production. A Grammy Award-winning engineer, Myron has recorded and/or mixed for a variety of artists including George Benson, Babyface, The Underdogs, Earth, Wind and Fire’s Verdine White, Eddie McCoy and the last Michael Jackson CD. A specialist in music production, he has been the technical director for Prince, Sinbad and Freddie Ravel. His expertise has earned him the title of “Miracle Myron” as he can handle any technical situation and fix – anything.

Evan Salce – first began to study sound design at Occidental College. There, he honed his craft in voiceover recording, production, post-production and mixing by working on numerous college films and TV shows. After graduating, Evan began working as a Production Coordinator and sound mixer on various animated shows for Machinima, Inc. He has also worked as a director, writer and producer on independent films.

Jim Jeffrey – having worked on many records for major and indi labels, Jim understands both sides of the recording studio and regularly works on recording projects for various artists. He includes such labels as Virgin, Columbia and Metal God Records in his engineering credits.

Kenyon Murphy – began his journey in in sound mixing is a small, local church. From set-up to take-down, he fell in love with the world of sound. He quickly branched out to recording audio for commercials, student films and feature films, taking him all the way to location work in New Zealand. He is continuing is education pursuing a degree in Sound Arts.